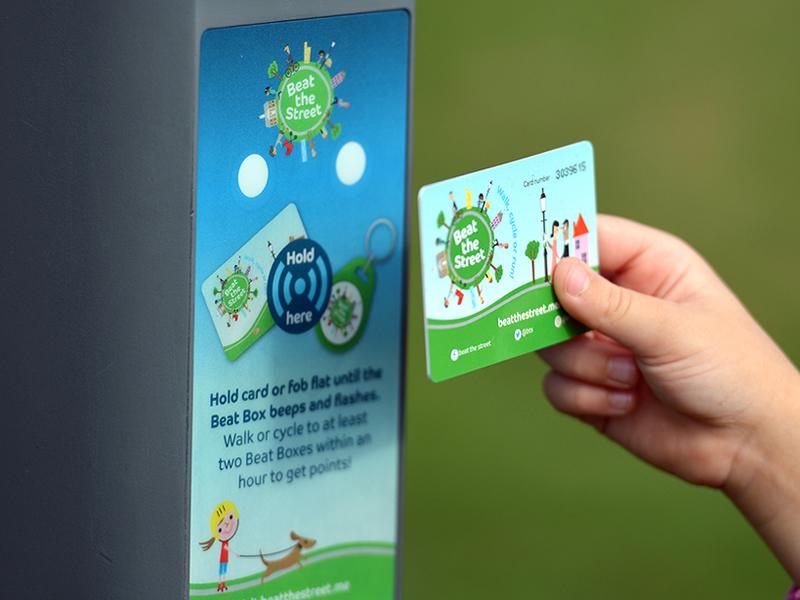 Together, participants have walked, rolled, cycled, scooted, and run nearly 24,000 miles in just one week.

Players can pick up a free card from one of the distribution points on the www.beatthestreet.me/eastrenfrewshire website and then join a team.

Players then hover these cards over against one of 80 special sensors called Beat Boxes which have been placed approximately half a mile apart on lampposts. The first Beat Box starts the journey and the next scores 10 points. The further you travel, the more points you score for your team. There are separate leaderboards for school teams plus another for community and workplace teams. Each is divided into total and average points to give teams of every size an opportunity to win, plus there are prizes – including ‘lucky tap’ prizes for individuals.

Currently, Kirkhill Primary School tops the total points leaderboard and Team Balgray tops the average points leaderboard – however with five more weeks of the competition, it could all change. Additionally, this week (Wednesday, 7th October), is Go Explore where there will be bonus points on Beat Boxes near to places of historic or cultural interest.

Val Caldwell, Beat the Street programme manager for Scotland, said: “We know that people in East Renfrewshire are enthusiastic Beat the Street participants, but we are still amazed at the number of people who are playing and how far you have travelled! Please spread the word as we’d love for more people to get involved.”

The initiative is delivered by Intelligent Health on behalf of East Renfrewshire Council, Paths for All’s Smarter Choices, Smarter Places programme and the Scottish Government.

To find out more, visit beatthestreet.me/eastrenfrewshire or follow @BTSEastRen on social media.