Nova revealed as winner of the 2020 Say Award

The 2020 winner of Scotland’s national music prize, The Scottish Album of the Year (SAY) Award, was revealed as Nova, the youngest ever winner, for her debut release ‘Re-Up’. 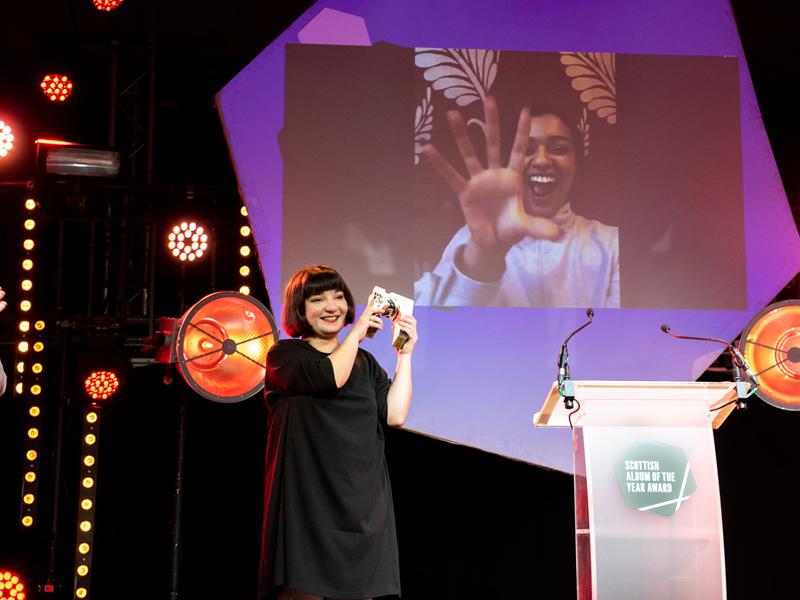 The 2020 winner of Scotland’s national music prize, The Scottish Album of the Year (SAY) Award, was revealed as Nova for her debut release ‘Re-Up’.

Breaking records as the youngest ever winner in The SAY Award’s nine-year history and the first rap/grime album to win the award, 24 year old Nova (Shaheeda Sinckler) accepted her trophy and £20,000 prize remotely via video link, as she isolates following a positive COVID-19 test. The news was revealed live on stage by Nova’s manager Sof Staune (VAJ Power), with Nova’s initial shock reaction caught live on camera.

Based in Edinburgh, the rapper, producer and DJ Nova celebrates Glasgow’s DIY underground music scene and all it entails in ‘Re-Up’; utilising compelling and introspective storytelling to take her listeners on a journey through afterparties, the struggles of young people (particularly around money) and Nova’s unfiltered truth.

The SAY Award celebrates, promotes and rewards the incredible strength, passion and diversity of Scottish music, and after another incredible campaign, organisers are thrilled ‘Re-Up’ is officially announced as 2020’s Scottish Album of the Year.

Winning the prestigious award in a year like no other, Nova said: “It is such an incredible feeling to have won the 2020 Scottish Album of the Year Award, just a couple of weeks shy of my 25th birthday! It is so affirming - any doubts that I might have had previously are now out of the window and I’m seriously so excited for the future. I’m excited to keep on this upwards trajectory, thrilled to encounter new experiences and take my professionalism to the next level. To think that my manager and I had no idea where we would end up when we started working together and now to have made it here is just fantastic!

It hasn’t always been easy - there have been a lot of late nights, night buses and moments of uncertainty, to name a few challenges, but winning this award has solidified my belief that hard work and determination bring results. So don’t call me lucky because I worked my butt off to move forward - and you can too.

There is so much possibility in the air and I feel so free, nurturing old bonds and making new ones is what I can see on the horizon. I’ve already begun working on my next project and I cannot wait to see how THAT is received. I’m sending much love and blessings to everyone who made this possible.”

Listen to the Scottish Album of the Year, ‘Re-Up’ here