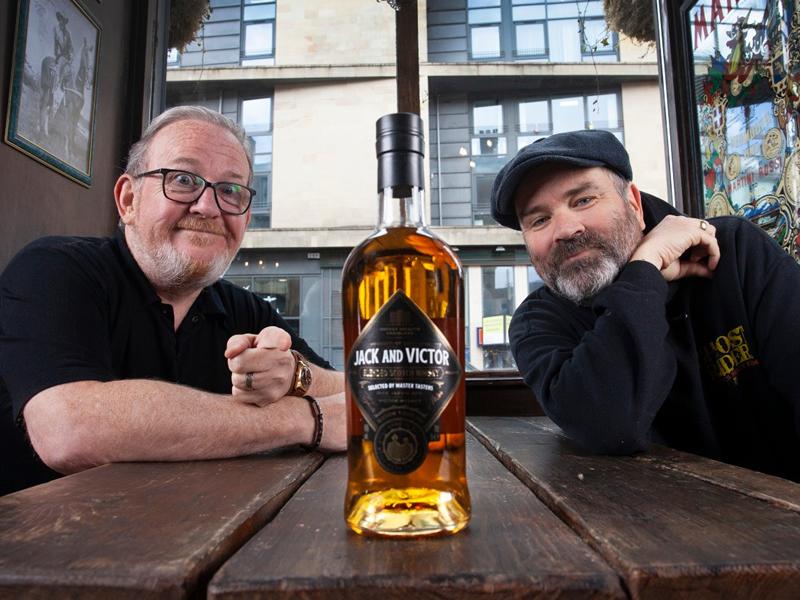 From today, Wednesday 26th May, the first batch of Jack and Victor Whisky is exclusively available for 48 hours to those who have pre-registered for a bottle, ahead of general public sale this coming Friday (28th May) at 9am on www.jackandvictor.com.

Jack and Victor Whisky comes in a 70cl bottle, which would sit pride of place in The Clansman, and has been distilled to suit whisky newcomers and connoisseurs alike, with tastes of honeyed orchard fruits and sweet malted barley. Wonderfully balanced, the dram also has a delicate peat smokiness and notes of fresh vanilla and oak spice, however it is not yet known whether it was filtered through the heather.

The limited-edition blended Scotch has been months in the making, after fans were teased with cryptic clues on social media back in March, before it was finally announced that actors and writers Ford Kiernan and Greg Hemphill had been secretly working on the tipple. When registration opened, thousands of fans signed up to snap up a bottle of the limited edition drop.

Commenting on the new whisky, Jack Jarvis Esq, said: “For too many years we’d been drinking that muck they sell in The Clansman, so we decided it’s about time we make our own dram. It’s fair to say that after a few trial sessions at Osprey Heights, we’re chuffed with the final outcome.”

In addition, Victor McDade, added: “It has been tricky keeping this a secret over the last few months, but we managed it. It’s the best of gear and it comes with a lovely shiny label and everything. With Father’s Day coming up, we’re sure folk will enjoy a couple of goldies with their very own old man. We reckon even Clark Gable would have liked it.”