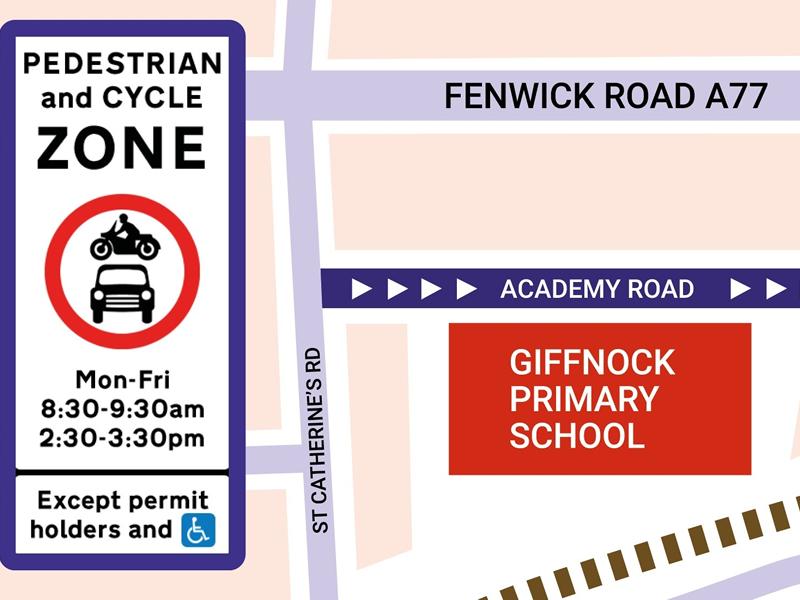 Measures will be introduced outside Giffnock Primary School to restrict most vehicles from entering Academy Road when pupils are arriving and leaving at the start and end of the school day.

Taken forward with Sustrans ‘Spaces for People’ funding, the measures will address community concerns regarding difficulties around adhering to social distancing guidelines, as well as help to address ongoing road safety issues at the school.

The scheme will start on 7 June 2021 and will operate on a temporary basis for a maximum of 18 months. During this time, the Council will seek feedback from parents, pupils and residents to determine whether the scheme should be made permanent, modified or withdrawn.

Exemptions to restrictions will apply to include permit and blue badge holders as well as emergency vehicles. Residents within affected streets will be provided with a permit as well as instructions on how to apply for additional permits, if necessary.

Environment Convener, Councillor Alan Lafferty, said: “The introduction of a ‘School Street’ at Giffnock Primary School will help make the journey to and from school safer, healthier and more pleasant for our pupils and their families. The scheme will encourage more active travel to school through walking, cycling and scooting which can be a long term benefit for physical and mental health. It will also help to reduce congestion and pollution at the school gates. For those parents who still need to drive, we ask that you park away from the school and walk for the last five or ten minutes of the journey. I look forward to seeing this pilot getting started and if successful we will consider if there are other schools which could also benefit from a similar scheme being introduced in the future.”

Karen McGregor, Sustrans’ Director of Capital Programmes, added: “We’re really pleased that Spaces for People is making it easier for children and parents to walk, wheel or cycle to Giffnock Primary. As well as a fantastic way to encourage more physical activity, School Streets, are also helping to reduce pollution and traffic congestion in the local community.”

The scheme will continually be reviewed and the public are encouraged to submit feedback through the Spaces for People Commonplace platform: erspacesforpeople.commonplace.is

Any enquiries regarding the scheme should be emailed to: spacesforpeople@eastrenfrewshire.gov.uk.