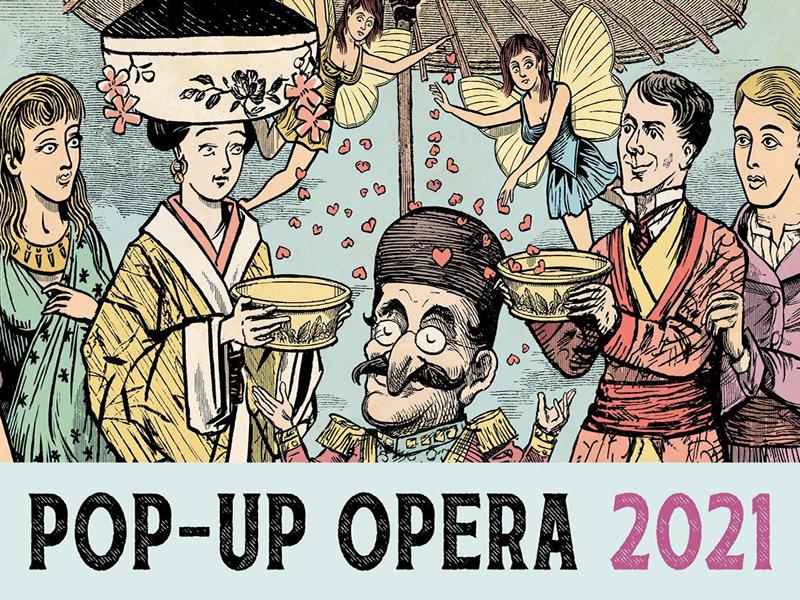 Attracting expected socially-distanced audiences of over 12,000, two specially-adapted trailers will take to the road at the same time, condensing five fun-filled Gilbert & Sullivan classics and all their frivolity into 30 minute performances of A Little Bit of… The Gondoliers, The Mikado, The Pirates of Penzance, HMS Pinafore and Iolanthe.

Featuring some of Gilbert & Sullivan’s wittiest lyrics and best- known tunes, the shows are an ideal opportunity for anyone new to opera to try a taster. Cleverly re-scored by Scottish Opera’s Head of Music, Derek Clark, with story text by Allan Dunn, the shows will be popping up at a variety of iconic and surprising locations across Scotland starting in Inverness, before extending across Aberdeenshire, the Isle of Lewis and down to Dumfries and the Scottish Borders via Dundee, Edinburgh and Glasgow. While past productions of Pop-up Operas have accommodated both the audience and performers inside the mobile Theatre Royal trailer, this year performances are al fresco with a covered stage and audiences out front in the open air, seated in household bubbles in line with the current Scottish Government guidelines.

The final leg of the tour, running throughout September, will offer a double bill of shows including the Pirates of Penzance and a revival of A Little Bit of Bubble McBea. Aimed at children in Primary 1 to 3, Bubble McBea deals with environmental issues in the coasts around Scotland, raising awareness of sea pollution in the run up to COP26 in Glasgow.

Scottish Opera’s General Director, Alex Reedijk, said: “The return to live performance is something we have long awaited and after 9 months we are delighted to kick off what is sure to be a summer like no other, with Pop-up Opera. The roadshow is at the heart of what we do as a company, travelling the highways and byways of Scotland to local communities and making opera accessible to all. So, we are thrilled to have the opportunity to return to this in a safe manner at locations across Scotland. Using two trailers allows us to offer over 200 performances with double the fun for double the audiences. We look forward to seeing everyone at our outdoor performances very soon and hopefully inside theatres in the near future.”

Scottish Opera’s Director of Education, Jane Davidson, said: “We are delighted to have our Pop-up Opera back on the road with a collection of fantastically fun shows for the whole family to enjoy. With colourful illustrations and an incredible cast the pop-up shows will transport you in to the wonderfully weird world of WS Gilbert and Arthur Sullivan, complete with glorious music, wit and heartfelt sentiment. Later in the summer, and with COP26 an important date in the 2021 global calendar, we hope that younger audiences will enjoy visiting the undersea world of Bubble McBea – an original story which combines the idyllic setting of life on a remote Scottish island with issues around sea pollution. The show engages children in the climate change discussion and encourages them through the medium of music and storytelling, to consider the impact continued change will have on their own communities and the world as a whole.”

Tickets will be on sale at Scottish Opera’s website www.scottishopera.org.uk from Wednesday 2 June.