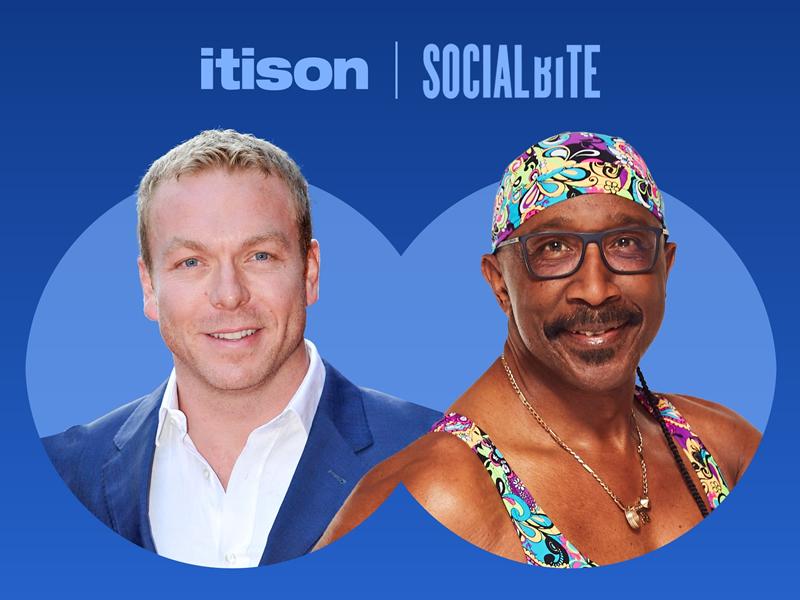 They have brought us an evening with George Clooney, lunch with Leonardo Di Caprio and now itison are back with not one, but two, VIP experiences to raise money for Social Bite and help break the cycle of homelessness in Scotland for good.

itison are joining forces with Social Bite as part of their Break The Cycle fundraising campaign to give two lucky winners the chance to win a VIP meet & greet with six times Olympic Gold medallist Sir Chris Hoy at the Sir Chris Hoy Velodrome or a private workout session and year’s supply of exercise classes with 90’s fitness legend, Mr Motivator MBE.

By donating £5 at itison.com you’ll be entered into a free prize draw to win a VIP experience plus entry into Social Bite’s Break The Cycle race from Glasgow to Edinburgh on the 5th September. The £5 donation will go towards buying a hot meal for a homeless person supported by Social Bite.

itison has partnered with Social Bite for over seven years to help with their aim of ending homelessness in Scotland for good. They have raised over £2.7 million for the charity with members donating over 600,000 meals to those who need it most and helped raise funds for the first Social Bite village in Edinburgh. Now Social Bite are on a mission to raise £1 million to build two brand new villages in target cities Glasgow and London.

Oli Norman, CEO at itison said: “Every year we’re blown away by the generosity and support of our members, so we’re excited to be giving a VIP experience back to them - who wouldn’t want to meet one of the world’s greatest Olympic athletes or don their best lycra for the ultimate 90s throwback!”

“We helped raise funds to build the first Social Bite village in Edinburgh and seeing the difference that has made to people’s lives over the years has been amazing. We’re incredibly proud to be helping them build a brand-new village in itison’s home city of Glasgow!”

Josh Littlejohn, Co-founder of Social Bite said: “We are delighted to partner with our amazing friends at itison to offer this incredible experience with Sir Chris Hoy and Mr Motivator. By entering to win, you are helping to buy a meal for a homeless person and build two new Social Bite Villages. We are so grateful to itison for their continued support and thank you to everyone who enters!”

To donate £5 for your chance to win visit www.itison.com. The lucky winners will be announced on Monday 5th July.

100% of money raised will be donated to Social Bite.