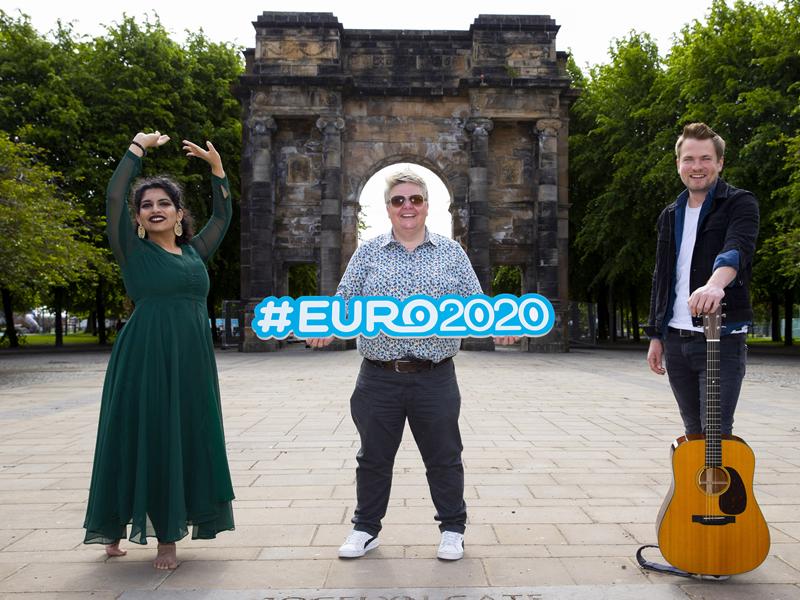 The UEFA EURO 2020 Glasgow Fan Zone festival will allow visitors to enjoy the sights, sounds and excitement of live entertainment again for 23 days, with everything from contemporary and traditional music, comedy and drag nights to cinema, dance and family entertainment.

The LOS Glasgow partners (Scottish FA, Glasgow Life, Scottish Government, Police Scotland and VisitScotland) are committed to providing a safe and COVID secure environment for Scotland fans and visitors alike to connect with and celebrate the tournament, including all those visiting the Glasgow Green Fan Zone.

Cultural events will take place on days when there are no matches – and the majority of afternoons when there is only an evening match – and will be viewable only from the Food & Beverage Garden area. The Fan Zone will be a largely seated venue, subject to relevant physical distancing requirements and all performances must be booked in advance.

The performances will be ticketed and will be largely free events, except for six selected performances priced at £20 per table, or £10 for an accessible ticket with access to the viewing platform for one person plus a free companion and will be available to book at 10am tomorrow, Thursday 10 June via glasgowfanzone.seetickets.com

Visitors to the Green can expect fantastic performances from some of Scotland’s most exciting musicians. Mogwai’s Stuart Braithwaite will spin some tunes from his vinyl collection on Sunday 4 July, funk soul act Tom McGuire & The Brassholes will join a bill of emerging talent for a paid-for New Music Night on Thursday 8 July and festival favourites Colonel Mustard and the Dijon 5 will close the party on the afternoon of Sunday 11 July ahead of the EURO 2020 final.

The programme will give visitors a flavour of some of the city’s most-loved festivals, with a number of special collaborations planned including two evenings of entertainment from Celtic Connections priced at £20 a table, featuring the likes of Tide Lines and Kinnaris Quintet on Thursday 24 June and leading folk band Rura on Friday 9 July.

Wednesday 30 June will see Glasgow Jazz Festival bring exuberant jazz-funk collective Fat-Suit, amongst others, to the stage while Wee Write will pop-up on the Green with big screen storytelling sessions with celebrated children’s authors including Michael Murpurgo and Konnie Huq.

Refugee Festival Scotland will mark World Refugee Day, Sunday 20 June, with an afternoon of special musical and dance performances which explore building bonds of friendship after the pandemic and reconnecting the wide range of communities who have settled in Scotland.

On Sunday 4 July, Queens on the Green will see a glittery night celebrating Scottish drag as Drag Race UK stars Lawrence Chaney and Ellie Diamond take to the stage alongside a line-up of local drag acts for one of the chargeable events.

Comedy fans can purchase tickets for Funny at the Fan Zone with Susie McCabe and Soccer FM on Friday 25 June, featuring Ray Bradshaw, Steven Mill, Billy Kirkwood, and more. The laughs will continue with free shows from Big Angie’s Bingo on Friday 2 and Thursday 8 July and stand up and chat from Fred Macaulay and Friends featuring Chris Forbes will be a paid-for event taking place Saturday 10 July.

Dance company THREE60 will also showcase two pieces on Saturday 10 July and a South Asian Arts afternoon on Sunday 27 June will see the premiere of Ekta - a lively mix of music, dance and comedy from Scotland’s South Asian diaspora.

Creative Communities will bring Artists in Residence from the South, North East and North West of Glasgow to the Green across the tournament in celebration of local communities. Expect performances from video and performance artist Donna Rutherford, string quartet Nevis Ensemble, Ando Glaso amongst others.

Families will also be able to enjoy interactive activities with fun-filled entertainment for the wee ones with Be Bop Bairns and The Boogie Unicorn.

On Thursday 1 July, Glasgow’s hosting of the COP26 Climate Change Conference will be celebrated with Enough is Enough: Music for COP26 - a performance curated with Oi Musica featuring Post Coal Prom Queen, Hesu – Spirit of Music and Glasgow Hip Hop Cypher. While Gaelic event Uainead – Degrees of Greeness, will bring an audio-visual film and live performance of words and songs together to explore the impacts of the climate crisis.

The Glasgow Green Fan Zone will be open for the 31 days of the tournament from 11 June to 11 July 2021, situated between McLennan Arch and the People’s Palace, and will accommodate up to 3,000 people per session, largely seated in groups of up to six people.

With a 10m Festival Tower set to host a range of content, communities will be able to safely experience a taste of festival atmosphere again on the Green as they gather to enjoy an exciting programme of sporting and cultural activity whilst sitting in their social bubbles.

A range of food and beverages showcasing the very best of Scottish produce will also be on offer.

The UEFA EURO 2020 Glasgow Fan Zone cultural programme can be viewed here with tickets available to book from 10am on Thursday 10th June via glasgowfanzone.seetickets.com