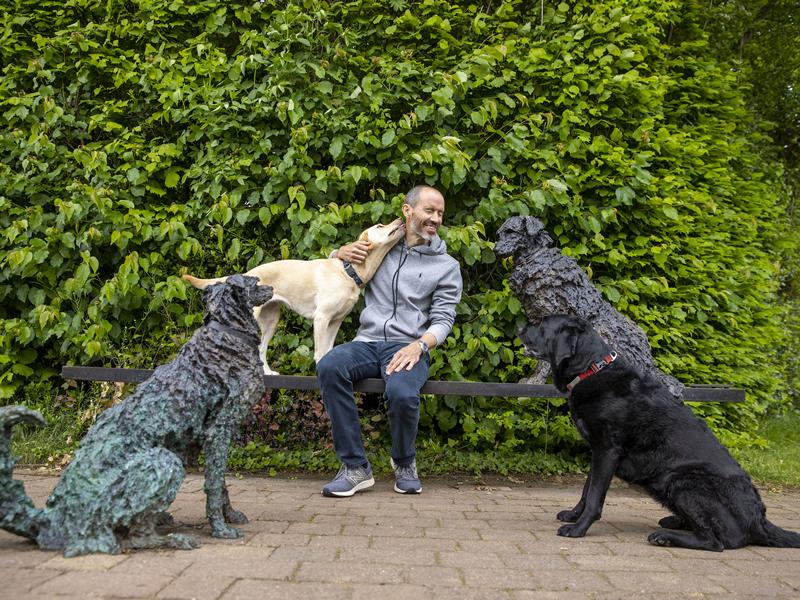 The Twa Dogs is a new sculpture at the National Trust for Scotland’s Robert Burns Birthplace.

Olive & Mabel’s sporting contests, with commentary by Troon-born broadcaster Andrew, went viral in 2020. As well as racking up nearly 90 million views on social media, they recently appeared on the Bafta TV Awards and are even the subject of a book.

They met life-size bronze sculptures of Luath and Caesar, dogs from Burns’ The Twa Dogs poem. Created by artist Sally Matthews, the work was commissioned by the Trustees of The National Trust for Scotland Foundation USA to honour their former chair, Helen E.R. Sayles.

Burns’ The Twa Dogs is the opening poem in Burns' first published collection, the 1786 Kilmarnock Edition. Luath was the name of Burns’ own collie and it is said that Burns met his future wife Jean Armour after she tripped over Luath at a wedding.

A social satire on wealth, poverty and class, the poem is largely told from the viewpoint of the dogs, with Burns using the conversation between Luath and Caesar to pointedly examine society’s inequalities.

The Twa Dogs sculpture now takes its place on Poet’s Path which connects Burns Cottage with the Robert Burns Birthplace Museum, owned and run by conservation charity, the National Trust for Scotland that over 90 years has saved, maintained and shared many of the country’s most loved places.

Kirstin Bridier from The National Trust for Scotland Foundation USA said: “The sculpture was commissioned to thank Helen E.R. Sayles for her six years as chair. Helen hails from Ayrshire and has supported many projects at the Robert Burns Birthplace Museum, so we thought the property was a perfect place to commemorate her tremendous leadership of the American foundation.”

Ali MacLeod, Head of Fundraising at the National Trust for Scotland said: “Helen, is a wonderful friend and supporter of both the NTS Foundation USA and our charity here in Scotland. Helen’s commitment to Scotland’s heritage, protecting the places we love for future generations, is inspiring and deeply valued.”