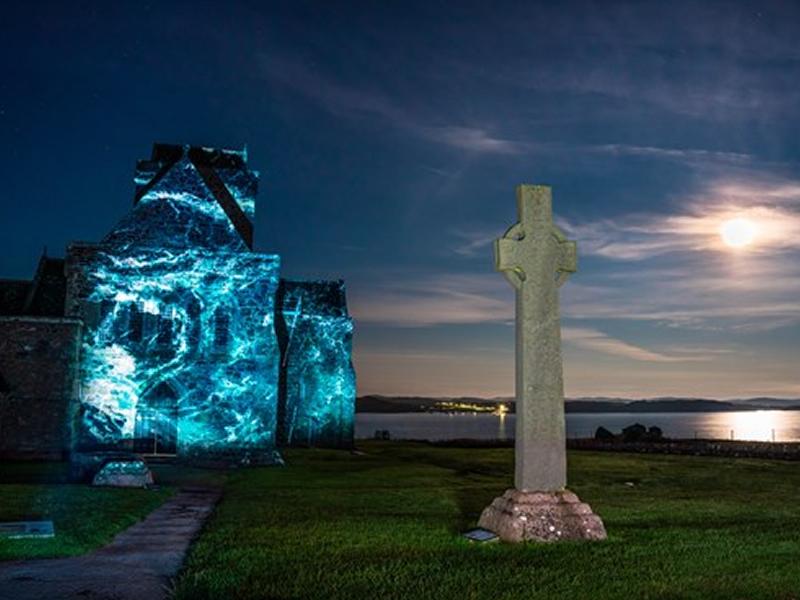 Audiences will see history light up like never before as an immersive new film narrated in English, Gaelic and Scots is screened for the first time as part of Scotland’s Year of Coasts and Waters 2020/21.

Historic Environment Scotland (HES) will premiere Light Waves – a 10-minute film celebrating Gaelic and Scots culture, heritage and tradition and its association with coasts and waters - at 7pm on Sunday 17 October via live-stream.

This one-of-a-kind film is set against the backdrop of some of Scotland’s most iconic locations including Historic Scotland properties Blackness Castle, Iona Abbey and Urquhart Castle which are managed by HES. The film also features dramatic projections including artwork of St. Columba and animated archive imagery of Herring girls, fishermen and historic maps to showcase the heritage and traditions of Scotland’s coasts and waters.

Produced by Double Take Projections, Light Waves is accompanied by a specially commissioned soundtrack by the Scottish band Niteworks and multilingual poetic narration.

Three Scottish poets were asked to create poems in English, Gaelic and Scots in response to the provocation of the Gaelic word ‘Aiseag’ which can mean ‘sea vessel’ ‘crossing’, ‘journey’ or act of deliverance and restitution in English.

The film begins with Colin Bramwell who reflects on the importance of our past connections with coasts and waters and how they have shaped communities with his poem Caledonian Canal, narrated in English. Following this, Pàdraig Macaoidh explores Scotland’s long-standing connection to the seas, coasts and lochs through myth and folklore with his Gaelic poem Mìorbhailean (Wonders). The film then reaches a crescendo with award-winning poet Roseanne Watt who considers our past, present and future relationship with, and our responsibility in looking after, our coasts and waters with her poem narrated in Shetlandic Scots.

Aiseag is supported by EventScotland through Scotland’s Year of Coasts and Waters 20/21.

Gillian Urquhart, Events Manager at HES, said: “With dramatic and immersive displays which have been projected onto historic sites located near Scotland’s shores, and powerful soundscapes of the multilingual poetic narration and emotive music, viewers will be taken on a journey to see Scotland’s history light up like never before.

“Aiseag is a fascinating word that has many meanings that correlate to the narrative and themes explored in Light Waves which not only celebrates our love of Scotland’s coasts and waters but showcases the important link with Gaelic and Scots culture and traditions, and the impact that Scotland’s waterways have had on communities throughout the country.”

Paul Bush OBE, Director of Events at VisitScotland, said: “We are pleased to be supporting Light Waves as part of Year of Coasts and Waters 20/21. Scotland offers the perfect stage to explore our natural environment and built heritage, and this film provides a great opportunity to celebrate the best of our Gaelic and Scots culture, heritage and our beautiful coasts and waters."

Light Waves will premiere at 7pm on Sunday 17 October on the HES Facebook and YouTube accounts and is free to watch.

The trailer for Light Waves can be viewed here: www.youtube.com