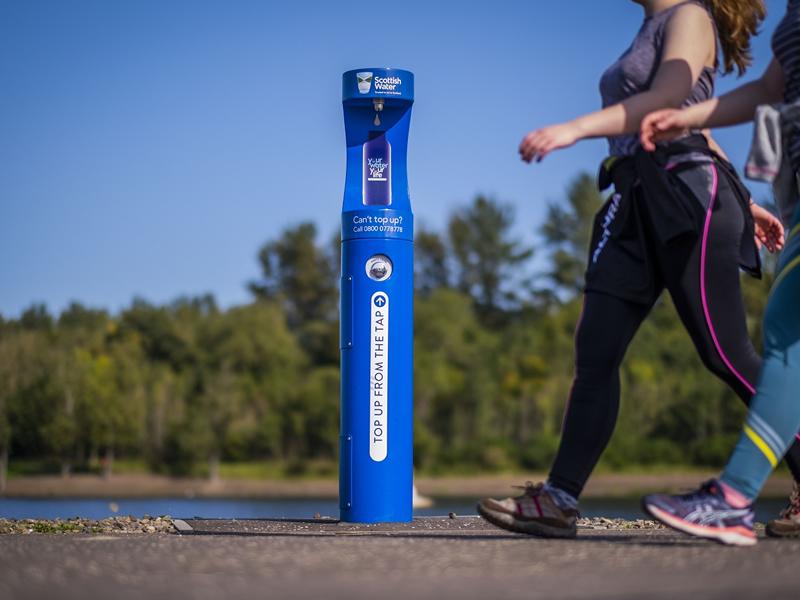 Scottish Water’s Top Up Taps (TUTs) are located across cities, towns and rural sites which allow people on-the-go to refill their water bottles for free while also doing their bit to reduce litter.

And now two of Scotland’s best-known walking and outdoors organisations - Paths for All and Ramblers Scotland - have joined the wave by supporting the drive to encourage more walkers, runners and cyclists to seek out the taps on their outings.

The Top up Taps are part of Scottish Water’s Your Water Your Life campaign, which was launched in June 2018 to emphasise the vital role water plays in the lives of people across Scotland.

There are already 60 Top Up Taps situated across Scotland with more to be installed over the rest of the year in town squares, city centres, sea fronts and even iconic landmarks.

And with Scotland’s famed Autumn beauty about to shine, it’s the perfect time to visit some of the existing taps in these locations. Towns boasting taps already include St Andrews, Linlithgow and Perth. Spot some of the blue taps in and around the city centre too at Glasgow Buchanan Street, Edinburgh Royal Mile and Stirling. There is even some taps situated in iconic Scottish locations like Glenfinnan Viaduct and the Scottish Parliament. Individuals can also enjoy fresh tap water while taking a trip to the seaside in Irvine and Portobello.

Rona Gibb, Senior Manager at Paths for All, said: "We can all do our bit to protect the environment and Top Up Taps make the choice to carry a refillable bottle when out walking an easy one.

“Here at Paths for All, we're encouraging everyone to walk for short daily journeys, as it's not only healthy, but driving less reduces our carbon emissions.

“It is of course important to stay hydrated when walking and that's why we love to see these taps popping up in our towns and cities across Scotland.

“They make it convenient for everyone to make the small daily changes - like walking and carrying tap water - that will collectively make a big difference to reducing pollution, and helping tackle climate change."

“We’re sure that they will prove very popular with thirsty walkers, while also helping to reduce plastic waste and protect the environments in which we all love to walk.”

Brian Lironi, Director of Corporate Affairs at Scottish Water, said: “Our Top up Taps mean people out and about can stay hydrated by filling up for free with our top quality tap water – this is ‘your’ water after all, so we want to make sure you can enjoy it as easy and often as possible.

“And as we’re set to once more enjoy Scotland’s amazing Autumn scenery and beauty, while ‘leaving only footprints’, having your own water bottle and ready supply of water in so many locations makes that so much more easier to achieve.

“We’d encourage people to keep an eye out for our eye-catching blue taps on their travels.”

Each of the distinctive, high-tech water stations is plumbed directly into the public water supply and each has digital tracking technology which logs how much water is being used and how much plastic potentially saved.

A full list of the current and planned Top up Taps is available on a dedicated website https://www.yourwateryourlife.co.uk/