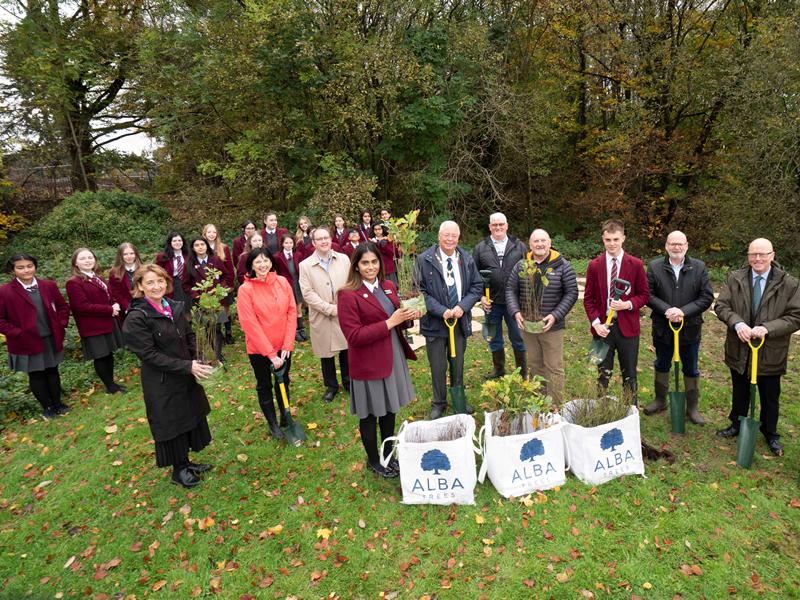 The initiative involves forming 26 woods about the size of a tennis court, each with 400 oak, aspen and silver birch trees.

COP26 – the United Nations Climate Change Conference – is being held in Glasgow from 31 October to 12 November, when world leaders will join forces to discuss the global climate emergency.

To mark this significant international event, and to support East Renfrewshire Council’s climate change ambitions, the project launched on Monday 1 November with the planting of the first 400 trees within Eastwood Park.

Over the duration of COP26, the Council will plant six of the wooded areas, with the remaining 20 being created by March 2022.

It is expected that over the lifetime of the trees, each wood will contribute to 50kg of CO2 being taken out of the atmosphere every year – supporting the Council’s drive towards a net-zero future.

East Renfrewshire Council Leader, Councillor Tony Buchanan, who planted one of the first trees at the newly created wooded area in Eastwood Park, said: “I’m delighted that this initiative to create 26 small wooded areas across East Renfrewshire has launched. It will not only provide areas of beauty for the local community to visit, but will also play a key part in delivering on our climate change commitment. With COP26 right on our doorstep, the spotlight is on climate change and this is a welcome step forward for the area. We will continue to work closely with our partners in the years ahead to play our part in supporting the drive for net zero carbon emissions by 2045.”

As part of the project, a number of schools and community groups will also be involved, with pupils from nearby St Ninian’s High School mucking in to plant some of the new trees within Eastwood Park.

The first six woods, to be planted during COP26, will be created in areas across East Renfrewshire, at:

All of the remaining 20 woods will be planted by the end of March 2022 at parks across the area.