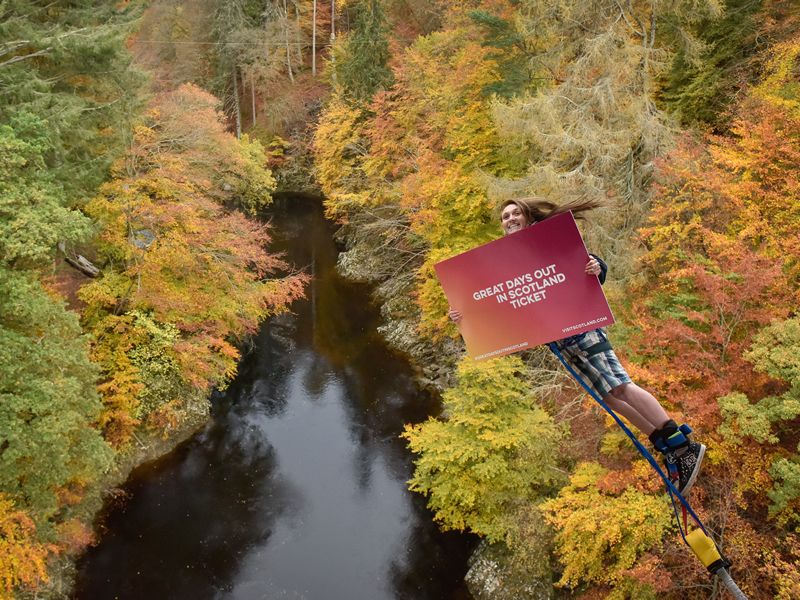 Whether it is visiting the lions at Five Sisters Zoo or enjoying a chocolate tasting experience from Master Chocolatier Iain Burnett in Perthshire, the Great Days Out in Scotland campaign will bring many of the country’s fantastic attractions and experiences to life.

As part of this campaign, visitors will be able to take advantage of discounted tickets to businesses participating in the Days Out Incentive Fund. Around 140 businesses have so far received funding to subsidise the cost of tickets, allowing visitors up to 50% off admission per ticket up to the value of £20.

Administered by VisitScotland on behalf of the Scottish Government, the incentive scheme is aimed at supporting tourism recovery by providing a boost for visitor attractions, day tour excursions and outdoor wildlife and adventure activities during the quieter winter months. Businesses are still able to apply for the Days Out Incentive Fund which is open until the end of November.

Using a combination of paid media and digital activity, including print and broadcast advertising, online videos and social media, the campaign - running from now until February 18, 2022 - aims to inspire Scots to get out and explore the country on a day out or short break.

A dedicated Great Days Out in Scotland landing page on VisitScotland’s website will direct visitors to businesses participating in the incentive scheme, as well as showcase the vast range of paid and free visitor attractions, adrenaline-filled outdoor adventures and food and drink experiences on offer throughout the country during the winter.

The project is part of the £25million tourism recovery programme announced by the First Minister in March 2021. The recovery proposals were developed by the Scottish Tourism Emergency Response Group (STERG) in collaboration with members of the Tourism Task Force. It has been developed with input from the Association of Scottish Visitor Attractions (ASVA) to help support the recovery of the tourism industry.

To search for businesses taking part in the scheme and for further inspiration on great days out across Scotland, visit: www.visitscotland.com/greatdaysout

Visitor attractions, day tour excursions and activity providers still have an opportunity to benefit from the Great Days Out in Scotland campaign. The Days Out Incentive Fund will reopen for new applications from Monday, November 8 to 5pm on Tuesday, November 30.
See www.visitscotland.org for information on guidance and eligibility criteria.

Scotrail will also be running a Buy One, Get One Free ticket offer in November, which can be used in conjunction with the Great Days Out in Scotland campaign. The train operator is launching a Buy One Get One Free offer from 14 November which will last for 2 weeks and will be valid for travel from Sunday to Thursday.
Look out for more details at www.scotrail.co.uk/free